… I have experienced a need to seek
and create other opportunities
with a better cultural fit for me.
Thank you for the opportunity.
– Me 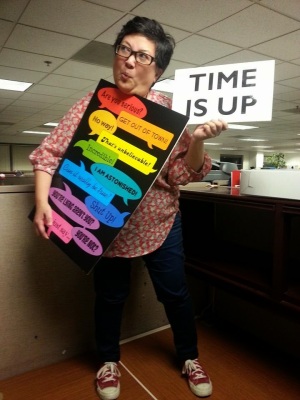 I chose to leave assigned seating.

The above quote? It is from my response to why I quit my job in 2014 – memorialized on a form – SF-50, Notification of Personnel Action.

In November 1994, I quit my job of approximately 3 years.

– and there are many other DIDs and DID NOTs, all along side of knowing that after quitting the traditional 5-day work week, I would figure out What’s next?

This post is inspired by a question – What has been a pivotal moment in your career? – posted in Tyler Tervooren’s Riskology Lab. For Tyler, he shares about his “what events have driven the most change … getting laid off from my corporate job.”

While I certainly have more than two pivotal moments in my career history, I find myself reflecting on the similarities of my 1994 and 2014 pivots. For me, these two points in my professional development are part of my venturing outside of the traditional workspace – outside of a building with assigned seating.

Here I share the status of my funds, what I did the day after, ideas that were brewing, and a couple of memorable moments.

Funds. I was saving up for a down-payment on a house; those funds were reallocated to What’s next?

The next day. Wednesday. I quit my corporate job on a Tuesday, which was the the anniversary of the Clean Air Act. The next morning, I drove from San Diego County to Orange County. Thanks to my friend Jenifer, I spent the day with Nicole and her, two women who started their own environmental consulting practice. And as Jenifer reminded me, I did not have to wear the corporate attire; I could show up with no heels, no pantyhose (commonly worn back then), no dry clean-only clothing pieces, and no bra (if I so desired).

In short, I was having fun, doing what I enjoyed – hanging out with friends.

Ideas brewing. The electric industry restructuring (sometimes referred to as deregulation) was in gear. I had an idea of what the “future” would look like for air quality and power generation that could not be served within the organization I was working for, although I tried – I really tried.

What eventually emerged was unplanned and therefore unexpected – my starting up an environmental consulting business that was active for 13 years.

Memorable moments.* When a co-worker cursed at me, I cursed back in defense – OOPSIE me! (I would not recommend anyone doing this – even in defense.) When I received an email verbal reprimand that I felt was unwarranted, I did a reply-all and added other people to the distribution list; the reprimand was eventually expunged – OOPSIE him!

The next day. Monday. I quit my job by the requisite date, which was on a Friday. Monday was the beginning of the next work-day. I shared a bit about this in a previous post, Time for Creative Potential. (By the way, those hyacinths graced my home nicely.) And I spent the evening at an improv jam, and the rest of the week also at improv-related activities.

In short, I was having fun, doing what I enjoyed – hanging out with friends.

Ideas brewing. What I call anthrocubeology is what continues to brew, which may have started as early as 1991. Anthrocubeology is the intersection of what I recognize as improv, servant leadership, and behavior design.

I began improv in 2011. In 1999, I learned a servant-leader philosophy is my approach to working with people. And in the early 1990s, my patterns and silly games were “life hacks” for project management, time management, mindfulness, wellness, etc; I now realize these are behavior design-related. I learned about Behavior Design in from Dr. BJ Fogg, who characterizes his work as follows – “My expertise is creating systems to change human behavior. I call this “Behavior Design.”” I participated in BJ’s June 2011 Behavior Design Boot Camp. I also am a Certified Tiny Habits® Coach – trained as an expert in how to create habits.

My ideas? Still brewing and emerging. I am repositioning my consulting practice, establishing my coaching practice, AND creating the way of anthrocubeology – where self-awareness informs choices for meaningful interactions with one another to create workspace cultural shifts.

Memorable moments.* When a co-worker gave me a talk-to-the-hand in a meeting attended by others – THUMBS DOWN you! When I confronted my concerns about cultural fit in a weekly office meeting – THUMBS UP me! (Okay, that got mixed reviews by others.)

What is your un-assigned seating endeavor?
(Or in Tyler’s words – What has been a pivotal moment in your career?)

This site uses Akismet to reduce spam. Learn how your comment data is processed.

stories about the skin we live in

An inventory of the meaningful life.

The musings of a distracted mind.

caring for those with Frontotemporal Dementia (FTD)

A blog full of humorous and poignant observations.

THE BEST OF POETRY

for the love of vogs

The improv blog with attitude.